Future climate data is a major source of uncertainty of model-based assessment’s output. This uncertainty may arise from different sources, e.g. in the climate model structure or in the forcing data (i.e. the applied scenario). The level of uncertainty can be explored by using a multi-model ensemble approach, which is a standard technique for improving forecasts on different timescales and considering different scenarios. Furthermore, raw climate model outputs have systematic errors compared to observational data. These can be removed by applying different bias correction methods, e.g. quantile mapping, which is one of the most popular bias correction methods

The objective of this task was to provide climate model simulation data for all case studies as an input to the OPTAIN modelling approaches, namely the catchment and the field scale modelling. For this purpose, we used a common climate database - RCM simulations from the EURO-CORDEX project and the Representative Concentration Pathway (RCP) scenarios 2.6, 4.5 and 8.5, which are marked according to the radiation contribution at the end of the 21st century. Bias correction was done using ERA5-Land reanalysis data with non-parametric empirical quantile mapping, the reference period for estimated bias was the 30-year period 1981–2010. Projections were prepared for the period 1981-2099/2100 for 6 different models for 7 variables (mean, minimum and maximum air temperature, precipitation, solar radiation, wind speed and relative humidity). A publicly available version of the dataset is accessible on ZENODO as a part of OPTAIN project repository.

For the analysis of the ensemble of climate simulations we calculated changes for three 30-years projection periods (1st: 2011-2040, 2nd: 2041-2070, 3rd: 2071-2100) against the reference period 1981-2010 for each RCM model simulation. Then we constructed an ensemble, where the ensemble members were RCM model simulations, and calculated the ensemble spread (minimum, median and maximum values). Changes were estimated at the annual level and at the level of meteorological seasons. The coherence of the climate ensemble was estimated with an indicator called the “reliability of the change”, which tells us whether the ensemble members show similar changes.

From the analysis of the ensemble of RCM simulations we see that the reliability of the mean temperature changes is high or very high. The range of the median annual change of the mean temperature in the first period (2011-2040) is not very large, ranging from 0.8°C for the RCP2.6 scenario to 1.2°C for RCP8.5. The variability among domains is mainly 0.1°C or up to 0.3°C. Most seasonal changes are higher in winter and autumn than for the whole year and lower in spring and summer, but all are in the range of 0.5°C to 1.3°C. For the second period (2041-2070), projected annual changes range from 0.9°C (RCP2.6) to 2.8°C (RCP8.5), again being slightly higher for winter and autumn, and slightly lower for spring and summer. For the third period (2071-2100), the changes are even more pronounced and widely scattered among scenarios, from 1 to 4.4°C. Mainly, only the projected changes for spring are lower and similar or slightly higher for the other seasons. For temperatures, the projected increase is mainly highest in the Boreal region and lowest in Continental region.

The projections of precipitation changes are less reliable. High or very high reliability is observed in most cases for winter, less so for the annual scale, and mainly only for the RCP8.5 scenario for spring. Annual changes in the 1st period range from 4% (RCP2.6) to 10% (RCP8.5) increase, in the 2nd period from 4% to 11%, and in the 3rd period from 6% to 19% (both RCP8.5, different domains). The range of winter precipitation increase is from 8% to 38%, with much higher changes in the 3rd period than in the first two. The range of changes in spring for the RCP8.5 is from 9% to 27%. In general, on the annual scale the increase of precipitation is projected to be higher in Boreal region.

For solar radiation, the projections are reliable mainly for the changes in winter for RCP4.5 and RCP8.5, especially for Pannonian region, for spring for RCP8.5, and for annual changes only for some domains, especially for Boreal region. The vast majority of the predicted changes are not reliable for wind speed and relative humidity, and thus must be disregarded, or at least used with all caution and comments about reliability. 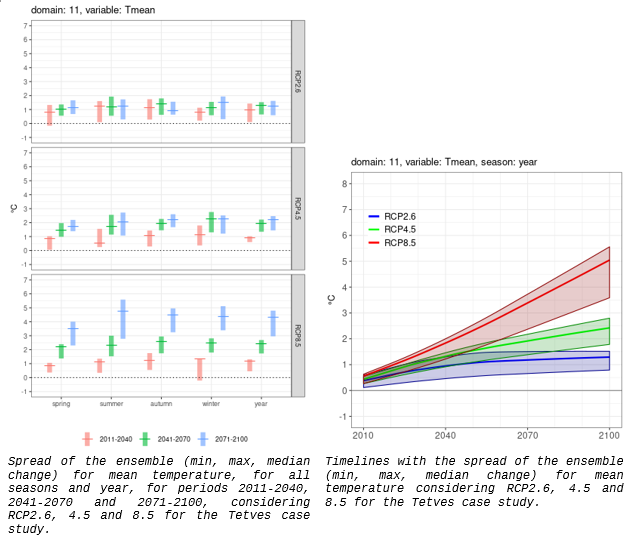